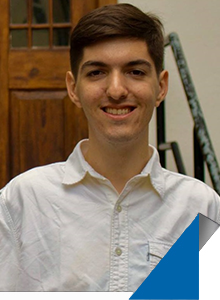 He was born in Belgrade where he finished The Fourteenth Belgrade Grammar School, with direction for social studies, with honours. He studies legal theory at University of Belgrade, Faculty of Law.

Since 2017, he is a member of the Consortium of Erasmus+ project Knowledge for Resilient Society (K-FORCE) led bz University of Novi Sad. On the project, he created, led and analysed surveys targeting young people about their knowledge of fire safety engineering and disaster risk management. He was also supporting promotion of project and its results.

In his free time, he likes writing and some of his articles have been published on a Student website Škrip. He also received an award for best essay by the Institute for European Affairs under their programme „How can I personally support Serbia’s integration to the European Union?“.

During his high school days, he initiated and organised charity concerts with high school band. He also took part in different seminars and courses.

He speaks English, can use German and has basic understanding of Spanish.