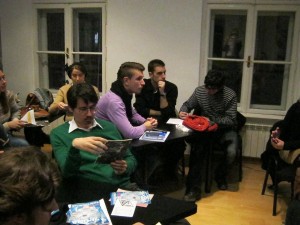 Our Peer2Peer second activity was organized in organization Munja- Incubator of Social Innovations in Sarajevo on 17th of December 2012 and it involved 23 participants. They were students from different universities, and two participants were highschool-pupils. In order to organize this activity we contacted MUNJA, prepared the flyer with logo of Youth Education Committee and description of the event. Subsequently, they published this event on their facebook page. We also announced the event on the mailing list BHfront and on several facebook groups such as Active Citizens, Soft Skills Academy, and perhaps this was the reason why we gathered sufficient number of interested participants.

On 17th of December, lecture started at 19:30 and lasted for 1h 30 minutes until 21:00 o’clock. We explained the process of application to the program Youth Reconciliation Ambassadors with concrete demonstration of Application form and essays that need to be written in order for future participants to apply. We introduced all aspects of the program “Youth Reconciliation Ambassadors“and its main idea and four core topics of seminar (History and human rights; Human rights and conflicts; Europe and reality; Ethnics and accountability). We pointed out the quality of the program and the fact that it involved concrete visits to different institutions which play significant role in reconciliation process. 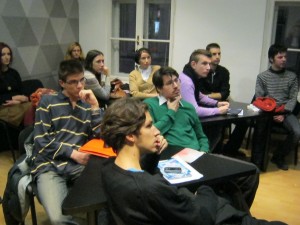 All participants showed great interest in the topics and wanted to know more about the process of application and dates expected for the next group. Again, we also invited a guest to join our lectures. Sunita Dautbegović-Bošnjaković, the executive director of the NGO Transitional Justice, Accountability and Remembrance in Bosnia and Herzegovina and she talked about RECOM Initiative, the way it was developed and she brought some interesting brochures and materials for participants.

In the end those participants who wanted, could sign the RECOM Initiative, and in this way again they confirmed their devotedness to the process of reconciliation in the region. More than ten participants gave their signatures. They wanted to know more why this program would be useful for them, why there are not many announcements of the program and Recom initiative in the media, and they mentioned nationalistic rhetoric, the politicization of truth and conflict as well as the politically biased processing of war crimes as the main problems in the region and establishing of culture of peace and dialogue.