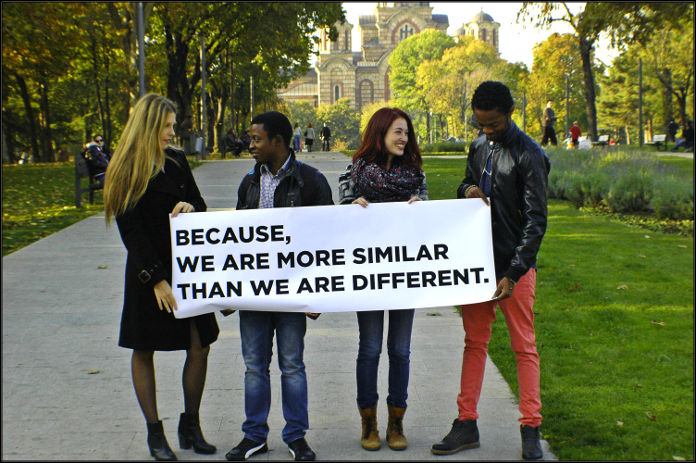 The EdVenture Partners (EVP) and the Institute for European Affairs (IEA) with the support from the U.S. Department of State are inviting interested and motivated students to participate in an extremely innovative and exciting global university initiative to challenge extremism – P2P: Challenging Extremism. They will have an opportunity to build social campaign to counter online extremism and to win trip to Washington D.C. in June 2017 where they will present their campaign!

Societies in many countries are increasingly challenged by terrorist and extremist groups who have demonstrated enormous skill and sophistication with technology and social media. They have successfully made “jihad” cool, their brand attractive, and propaganda believable with global youth, resulting in increased numbers of extremist recruits. This increasingly effective threat must be contested in the on-line space that is being manipulated by these groups, in order to erode their power, influence and will. It is vital that societies begin to implement tougher, hard-hitting online responses to win the digital war against these groups.

The project consists of two phases: to develop and implement Millennial-designed communication campaigns and viral activations that challenge violent extremism ideology, propaganda and recruitment messaging and to launch a wide-reaching global social media beta test that prototypes, tests and validates large numbers of peer-generated CVE strategies and tactics that can be scaled and pushed out.

Objective: To engage U.S. and international universities and their students to create and implement social media and digital campaign in a form of an initiative, product or a tool to counter the online presence of extremism. The strategy should motivate, empower and encourage others to become involved and take action in countering violent extremism (CVE) in a program sponsored by the U.S. Department of State Educational and Cultural Affairs.

EVP program is a pathway for young people, social networks and engaged communities to help counter violent extremist messaging and recruitment. By enlisting tech-savvy, digitally aware students from throughout the world, real progress with social impact can be realized. Students will create and implement culturally relevant and credible digital campaigns to engage civic minded university students and uncommitted populations. In the EVP program, university students in marketing, communications, digital media, information technologies, security and peace studies as well as in other fields relevant to the assignment, will be challenged to consider how to best counter online presence and narrative of extremism through the development, implementation and analysis of an unique initiative, product or a tool designed to counter the online messaging and recruitment efforts of extremist groups.

Dozens of teams, from the U.S. and internationally, will receive each a $2,000 USD operational budget to implement their campaign, and $400 USD for Facebook Ad Credits. Students will use this budget to implement various on-line and social media strategies, videos, student-developed mobile apps and other digital activations designed to educate, motivate and impact positive decision making behaviors with civic minded university students and the uncommitted populations. In the EVP program model, students and faculty release IP, allowing the most effective digital campaigns and approaches to be scaled up and pushed out in the future. The project also includes a global face-off competition where the top domestic and international university teams will have the possibility to present their campaign, in Washington, D.C. and compete for scholarship awards.

Safety and Security: The safety and security of students are paramount. This initiative is not designed to confront any one extremist group; the project’s main focus is to create campaigns to educate the public and uncommitted youth about counter extremism wherever it may exist. As a civilian sponsored initiative by U.S. Department of State, this program needs to be 100% open and transparent as it is designed as a U.S. Department of State sponsored international public diplomacy communications initiative to engage youth against extremism.

Bachelor or Master Students from the University of Belgrade who hold a Serbian citizenship, age 18 to 30 should send their CV and application form to p2pce@iea.rs no later than January 15, 2017 by 23:59hrs.

Admission fee for the program is 20 euros in local currency. All costs related to the program are covered by the organizer which include: tuition, development of the campaign, Facebook advertising and materials.

All activities are organized in Belgrade except the presentation of the winning teams which will be hosted in Washington D.C., USA at the end of June 2017.

HOW WILL THE TEAM WORK?

Team will be formed from selected participants from Belgrade. Participants will meet once a week and work together to create their own campaign and/or initiative to counter violent extremism online. They will have an operational budget of $2,000 USD and a budget of $400 USD for Facebook Ad Credits, in order to implement their idea. Representatives of the teams whose campaign and/or initiative has the best results will present their work in Washington D.C. together with other international teams in June 2017 and receive a reward – $5,000 for first place, $3,000 for second place and $1,000 for third place.

The meetings are starting at the end of January for three hours once a week. In order for the participant to be taken into consideration for the trip to Washington D.C. it has to take active participation in at least 80% of meetings.

Since 1990, the EdVenture Partners has been building academic partnerships for government, countries, companies, NGO’s and trade associations across the globe. The problems EVP solves are awareness and perception issues facing a brand, product or service. EVP’s innovative approach has been used on over 800 universities to reach targeted audiences for the U.S. Department of State, Time Magazine, Morocco, Canada, Citibank, Honda, American Petroleum Institute, Shell Oil, AT&T and Qatar, among others.

Institute for European Affairs is focusing on negotiations between Serbia and the EU as well as on strengthening the capacity of all sides involved in the process. Given the complexity and long duration of the process, the Institute brings together a large number of professionals and external experts with who organizes trainings, debates and other forms of capacity development. IEA’s overall goal is to facilitate better understanding of the EU, NATO and to contribute to enhanced understanding of Serbia – EU relations. The Institute actively advocates for fundamental reforms within the EU integration process and in cooperation with partners working on strengthening Serbia’s capacity to face the challenges of the global world through collective action. The overall objective is active membership of Serbia in Euro-Atlantic framework for the benefit of all citizens.