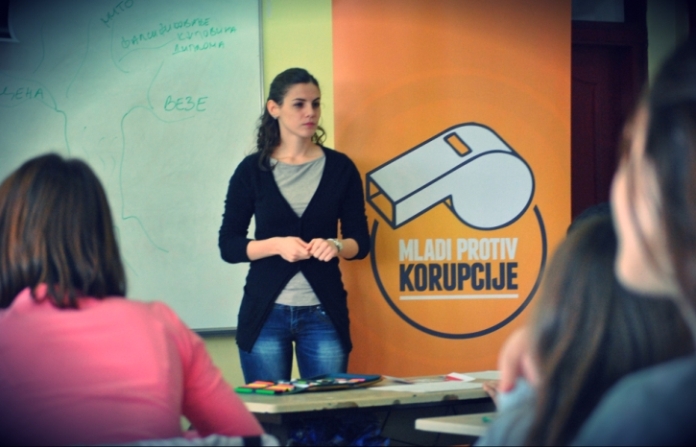 Youth Education Committee is implementing the programme Youth Against Corruption with partner organisation Initiative for Social Responsibility together with strategic support of Anti-Corruption Agency in Serbia.
The programme aims to reduce the level of corruption in Serbia. The aim will be achieved by developing responsible, educated, tolerant, moral and creative young public opinion in Serbia, which will use the knowledge and integrity to fight corruption. The programme focuses not only on the students but also the teachers, community leaders, local authorities, government officials and state institutions with the hope that it will thus encourage stronger cooperation between the young generation and institutions.
The programme is contributing the existing anti-corruption initiatives with fresh ideas, original and enthusiastic input of new generations. The programme also includes the basic principles underlying the strategy for young people. Our intention is to use this programme to encourage young people to strengthen their own integrity. Also, to actively participate in society in the decision making process, to collaborate with others at the local, regional and national level and in particular with representatives of schools, municipalities, civic associations, local authorities and others. Developing a culture of resistance to corruption is a long process, but the only real way to create an environment in which people have the knowledge, skills, and social power to resist corruption. By strengthening integrity and knowledge on corruption and anti-corruption mechanisms in future leaders and decision makers we believe we will contribute to broader fight against corruption.
Project is a part of a wider initiative supported by Anti-Corruption Agency in Serbia (ACAS). Namely, ACAS had a two-year project supported by the Norwegian MFA within which 42 students were admitted as volunteers in ACAS. ACAS organised training for trainers and prepared ten participants to be educators for this project. 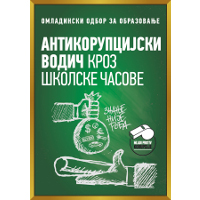 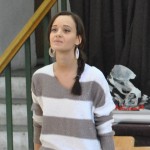 My experience duringthe trainings was excellent. The students were very interested in the subject and they have been in the mood for discussion. Conclusions of the trainings were great. We have managed to achieve cooperation and communication between educators, teachers and students and tried to encourage them to think in later work and to discussabout corruption. Finally, I can only conclude corruption is a major problem but not a problem that cannot be resolved together with young people who are familiar with the problem and empowered to respond.

It was a pleasure to take part in project Youth Against Corruption, primarily due to educational characterand the way in which young people are familiar with the problem of corruption. I was pleasantly surprised by interacting with young people at school and their knowledge of this harmful phenomenon. I hope that educators were able, at least, to motivate them to think of corruption as an unwanted form of social behaviour.

I am delighted with the positive reaction of students in the school we visited. They really proved to be able to cope with this subject and a number of their examples gave the true meaning to our work on the project. I hope that we will soon again meet and deal with the problem of corruption in our society.

Experience working on a project Youth Against Corruption was indeed a rare and excellent opportunity to speak with the youngest of corruption in a way that will arouse a desire for change in them, taking responsibility and personal initiative. This project can be a trigger of positive changes in our country, and we must support and assist its wider implementation.

Lectures were given in twelve schools both primary and high schools. In total fifty lectures of 45 minutes have been conducted. Twenty-four lectures were given in primary schools Jovan Cvijic, Olga Petrov, Milena Pavlovic Barili, 20. oktobar, 14. oktobar and Filip Filipovic and twenty-six were given in six of the Belgrade High Schools – the First, Sixth, Seventh, Ninth,  Thirteenth and Fourteenth.

The total number of students that attended the lectures was 1104, including 511 male students and 593 female students. The lectures were given as a substitution for a regular school class. Most of the lectures replaced the class of Civil education (52%), while other replace classes were: Arts (22%), Serbian language and literature (14%) and Sociology (12%).

Evaluations by the students

Average scores were calculated for all of the four questions. These analyses reveal that the concept of corruption and the prevention mechanisms are rarely mentioned in the formal education. The mean score for this question is 2.85. Also, results showed that the lectures overcame students’ expectations and the mean for this question was 5.36. Mean for the question regarding whether students had learned something new about corruption was 4.96, indicating that students have learned new information about corruption. For the last question, dealing with whether corruption should be mentioned during the formal education, the mean was 4.92, indicating that most of the students do believe that this is an important matter which should be a part of the school curriculum.

These results indicate that the concept of corruption is rarely mentioned during the formal education, while students agree that it should be a part of the curriculum. Also, the results show that the lectures overcame students’ expectations and that they think that they have learned a lot during these lectures.