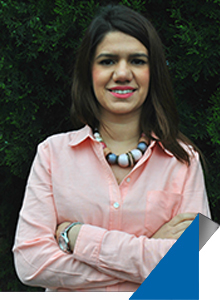 She was born in Nis, where she finished elementary school and high school „Stevan Sremac“, socio-linguistics. She is currently at the final year of BA studies at the Law faculty in Nis.

During her studies, she participated in numerous conferences, study visits, seminars organized by the OSCE, EU and UN simulations, both in the country and abroad, through which she improved her knowledge in law, gender equality, international law and human rights law. She is a member of CSOs and student organisations, as well as the founder and vice-president of the student organisation at Law faculty in Nis „Students club“, where she organized lectures, student fairs and workshops several years in a row.

In 2009 she was one of the coordinators and creators of the „Let’s write Bologna with Њ” project, organized in cooperation with Fund for Open Society and Council of Europe, that was dealing with analysis of the Bologna process implementation at the University of Nis. In 2012 she spent six months in the US participating in the student exchange program. She participated in numerous competitions, out of which the 3rd place at Oratory competition 2009 in Nis is among the most important ones. She also has experience in journalism that she acquired as an editor of the online portal of City of Nis “Nish magazin”.

She was an intern in Youth Education Committee from 1 april until 30 June 2014.