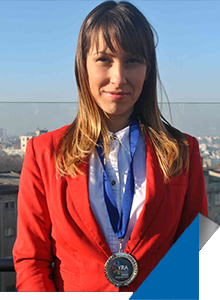 Jovana was born in Belgrade. She is a student of Italian and French language studies at the Faculty of Philology, University of Belgrade. As a student of philology, she always tends to widen her horizons. During high school, she had applied as a volunteer at the European Youth Olympic Festival, and ever since she has helped organizing almost every international sports event held in Belgrade. In 2011 she became a member of the European Students Forum, AEGEE, and as an active member of AEGEE, she has organized and coordinated many student exchanges and projects both on local and the European level. Her passion is diplomacy, she has participated as a delegate in several model EUs and model United Nations. After having participated in the Youth Reconciliation Ambassadors programme, she became a youth ambassador, and as such, she is firmly dedicated to developing cooperation in the region and spreading the European spirit among the youth in Serbia.

She is constantly contributing to developing better education in Serbia and encouraging the youth to take an active role in the society. As a great fan of non formal education, she is currently volunteering for the UN, Council of Europe and several NGOs in Serbia.