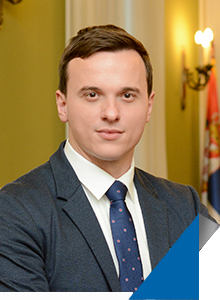 During the professional engagement, in the last twelve years, he has gained working experience in the state, private and non-governmental sectors, as well as in the international organization. He has prepared and implemented more than twenty smaller and larger programs, including more than a hundred domestic and international events, study visits and training for project managers, members of the academic community in connection with Euro-Atlantic integrations, human and minority rights, public responsibilities and democratization. He studied in Kragujevac, Belgrade, Oslo and Bruges, and was trained in about twenty countries around the world.

He received the title of a graduate in political sciences at the Faculty of Political Sciences in Belgrade, where he also completed the studies of knowledge innovations in the field of European Integration in 2012. Currently, at the same faculty, he is attending two master programs: International Security and European Studies. In 2008, he studied at the Summer School at the University of Oslo where he studied international relations and contemporary problems of governments and politics. At the same university, he completed a professional training course, and with a special scholarship he was given the opportunity to improve at the Nansen Peace Academy in Lillehammer. He also studied at the European College in Bruges, Belgium, at the European Political and Administrative Studies Program.

He started his career at the Helsinki Committee for Human Rights in Serbia on the Human Rights Education Program in 2005. During his work at the Committee, he was attending the Norwegian Helsinki Committee in Oslo. In 2010, he was employed by the OSCE Mission to Serbia in the Department for Democratization on a program of equal opportunities. In 2011, he became the coordinator of the program at the Center for Euro-Atlantic Studies, where he managed anti-corruption programs and analyzed the violations of human rights of members of the armed forces. During 2012, he was engaged in the Anti-Corruption Agency to monitor the conduct of elections and elaboration of integrity plans. He also worked in the private sector in the field of marketing.

Since 2014, he is a Team Europe member. Within this membership, he has visited 28 cities in 50 missions and has spoken with 2276 young people on the institutional framework of the EU, human rights, the accession of Serbia to the EU and EU programs for youth.

He has received numerous scholarships including a scholarship from the University of Oslo, the Nansen Peace Academy in Lillehammer, the Open Society Fund, the European College, the French Government, and the Government of Georgia. He is also the author and editor of several brochures on the EU. For seven years, he has been introducing an introduction to the European Union and NATO in Serbia and the region. He has been engaged in the position of Executive Director at the Institute for European Affairs for the past six years.