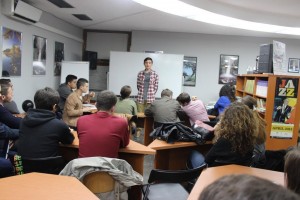 The two speeches I held were about my experience in the Youth Reconciliation Ambassadors programme. Therefore, the topics I presented pertained to the programme: I spoke about YRA, my personal experience, the upcoming programme in December 2013 but we also covered some of the topics that were discussed in Belgrade, including those about fostering the relations of young people from ex-Yugoslavia. The two speeches I delivered were portion of two separate English evening classes about leadership and citizenship, which are held in the American Corner in Prishtina. It was attended by students, as well as a representative of the British Embassy in Kosovo.

I did notice a great impact on them – this was proven to me by the massive amount of e-mails I received with questions they had thought of after my presentation. Most of them told me they were going to apply for participation in the programme as soon as possible. Thus, my lecture impacted on their willingness to participate in YRA and help the reconciliation process.

Most of the questions I received were about how the sensitive issue of Kosovo was handled and perceived in Serbia. I told them that I was positively flabbergasted and that everyone was very open-minded and willing to cooperate with each other, therefore living to their common epithet of reconciliation ambassadors. Moreover, I was asked how this experience has affected me personally and I responded by acknowledging the fact that I had become more tolerant to the ideas presented in the programme and that I had made some treasured friendships. Finally, I was asked if I felt safe during my stay in Belgrade (due to my national background) and I responded with a firm yes!