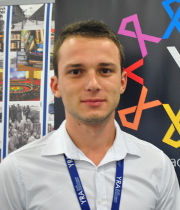 The topic of the discussion was “The power of identity, stereotypes and prejudices”. It was organised in the High school in Krushevo because we didn’t can find place about our peer to peer and few institutions did not replay on ours e-mails and calls. One part of participants were older of 18 years and one part were secondary-school students.

We were talking about a topic that was already known, Power of identity prejudices and stereotypes. They listened carefully and there were moments in which they were taking part in the speech. The participants were ready to answer on our questions and we were surprised how much they know about the topic.

Yes, they were excited, they did not want to go home. They were asking for more exercise in which they can show the meaning of the identity and its power. We were explaining the meaning of Prejudices and stereotypes with few games, and the participants had so much fun. They asked for another section soon.

From the beginning we let them (participants) to feel free and ask to us whatever they want. We received a few questions but one left me without words. One of the participants asked: “We as youth are not problem. Problem is older generation, for example, my parents don’t let me to go out and have fun with Albanians, how we can help them to change their opinion? What do you think, how should I react on that?”. So we discussed about older generation. Also there was a question: “can stereotypes disappear anyhow?”, “how long it will take, and how many generation are needed to change situation with prejudices and stereotypes?”, and similar questions.