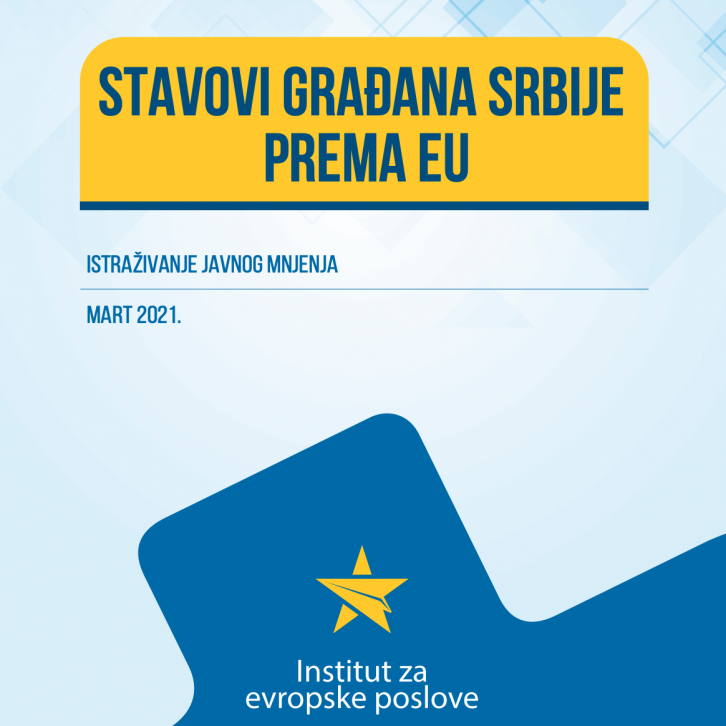 Attitudes of Serbian citizens towards the European Union

More than half of the citizens support EU membership, less than half would vote for membership in a referendum, while the majority thinks there are great benefits of cooperation. Serbia’s friends in the EU are Greece and France, the biggest enemies are Croatia and Great Britain, the best relations among neighbouring countries are with BiH. Germany is perceived as a friend and an enemy at the same time. Citizens do not have enough knowledge about EU integration, and they expect valid information about the EU from the media, the Government of Serbia and non-governmental organizations.

The Institute for European Affairs, in cooperation with the research house Ninamedia, conducted an opinion poll on the attitudes of Serbian citizens towards the European Union. The research was conducted at the end of March, on a representative sample of 1207 citizens. The focus of the research was on issues of support for membership and cooperation with the EU, as well as the relations with individual member states.

More than half of the respondents (53%) support Serbia’s membership in the European Union (these are mostly men, respondents under the age of 45, with the highest level of education, citizens of Vojvodina and those from urban areas), 35% have the opposite attitude, while 12% they could not comment on this issue. When comparing the obtained results, a slight decrease in the number of those who do not support Serbia’s membership in the EU was noticed.

When it comes to individual countries, 17.9% of respondents think that Serbia’s best friend is Greece, 10.5% state France, slightly less state Germany (8.6%) and Hungary (7.6%), while the largest number of respondents 36.9% do not know how to declare themselves on this issue. Comparing the results with those from previous research waves, a slight decline in values ​​for Greece and Germany was observed, while the number of those citing France increased.

Regarding the biggest enemy in the European Union, 17.8% of respondents consider it to be Germany, followed by Croatia 16.4% and Great Britain 13.5%, while 44.5% do not know how to declare themselves. After comparing with the results from the previous waves, a decreasing trend of the number of respondents who cite Croatia and Great Britain was noticed, while the number of those who cite Germany is slightly increasing.

Slightly more than a quarter of respondents, 26.7%, believe that we have the best relations with BiH among neighboring countries, followed by Hungary with 23.3% and Northern Macedonia with 9.3%, while other answers occur in less than 7% of cases.

Most respondents state that they expect to receive information about the EU through the media (32%), then from the Government of Serbia (28.2%), from the EU 11.7%, Parliament 9.7%, NGOs 9.4% and schools/faculty 6.4% while other answers occur in less than 2% of cases.

If a referendum on Serbia’s membership in the European Union were called tomorrow, 48.9% of respondents would say they would vote FOR (respondents with the highest level of education as well as residents of urban areas), 28.4% have the opposite position, 11.2% would not went to the polls, while 11.5% of them do not know how to vote. Comparing with the results from previous research waves, it was noticed that the results oscillate.

The full opinion poll can be downloaded here.