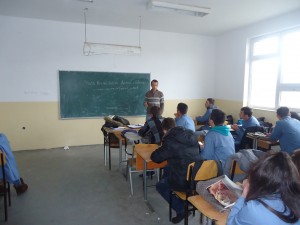 The first activity was organized on the offices of Red Cross in Gjilan with students of the gymnasium of the city. Beforehand, we met the director of the organisation and agreed to use their facilities and their office.

Afterwards, i met with the student’s president of the school to invite and explain the event that we’d organize. We got the approval of the participation and interest from the pupils committee. 15 students were invited however, only 4 of them participated. The activity was held on 12th of November on 12:00 p.m. with duration of one hour.

The second p2p was organized in the economics high school of Gjilan “Marin Barleti”. Before the event, we sent a request letter to the municipality department of education to ask for the approval to organize our event. Students of ages between 16 and 18 and of different ethnic background were our target group. The activity took place on 3rd of December and lasted for 45 minutes.

The main idea of both of our activites was to explain the study visit of YRA and the topics that we engaged ourselves in, during the visit. Nevertheless, the p2p activites were a good chance to debate and discuss on topics such as EU integration and the region, post-war processes, society structures, values and stereotypes etc. The debate was quite qualitative, taking in consideration the different views that we got the chance to hear from the participants.

All participants showed great interest on YRA and the topics relating reconciliation processes. We offered them a chance to apply for the next training as we wrote down the link and invited the interested students to join the YRA Facebook group. Apart from the information on YRA, the participants were also given brochures of Red Cross from the director of the organisation.

Their contact information were also given to the Red Cross Organisation so they could volunteer in the humanitarian activities that will be organised on the near future. 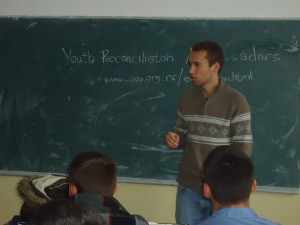 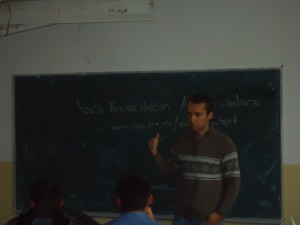