Why did I apply for this programme? Well, the main reason is it seemed challenging and completely different from everything I had been part of. I was part of many exchanges but this one was particularly interesting. Besides participants from the Netherlands, it involved young people from Serbia and Kosovo who had to cooperate in different workshops and activities and you won’t find that so often in everyday life. Before the programme I didn’t know what exactly to expect. I have never met anyone who participated in Our Future Europe programme in the years behind and who could pass me the impressions. I had expected that all people there would be highly educated with a strong background in NGO sector but still there had been a fear that things would escalate at one moment. However, it was completely different.

Duration of the exchange in Belgrade had been too short therefore another one was just perfect to bring people closer and to make friends for a lifetime. Nobody paid too much attention to politics even though we mentioned several things related to the conflict during the workshops. Each participant should have created a workshop with his group members and last one was about Kosovo-Serbia conflict. I personally was part of that group and we put a lot of effort in creating a presentation, trying to be informative and to intrigue participants to start a discussion among themselves. Duration of the workshop with a debate exceeded time limit for more than an hour. However, the debate didn’t look like the discussions of our politicians you could’ve seen on TV. It was more in friendly manner with good arguments and understanding other people’s thoughts and emotions. It was really unique experience to see and to be involved in such discussion. If only our politicians could’ve seen us. They would have learned a valuable lesson. 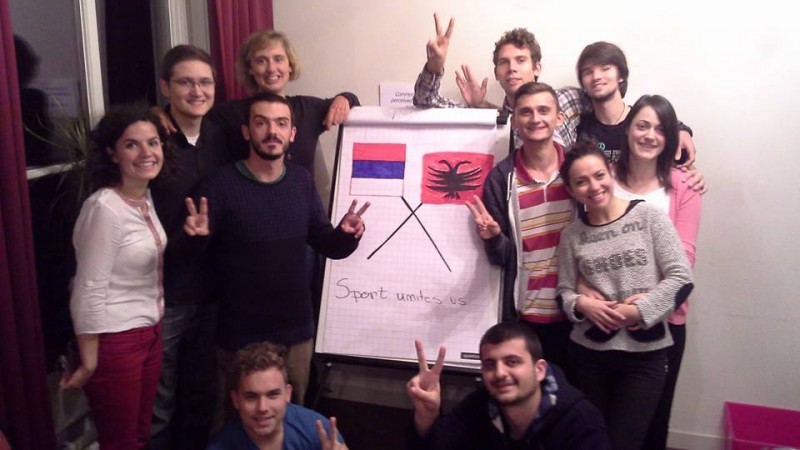 During the exchange in the Netherlands we watched the football match between Albania and Serbia together. Or at least the first half of the match. Forty three minutes, to be precise, before the match was interrupted. Situation between our people had been tensed before the game but we didn’t expect that it would be interrupted. After the interruption match was cancelled and we were pretty much bored with that fact. Sport should unite people not divide them and that is the message we sent to our Facebook friends right after the game was finished. We took a photo of us with two flags we drew on a flipchart and posted it. It was so funny making that photo but still we wanted to show that friendship between our people is possible. Afterwards, we went in a pub together, played darts, laughing and not thinking about the match.

All in all, Our Future Europe programme exceeded my expectations. It was intensive programme with lot of workshops and lectures, very productive but still interesting for all participants. Workshops were interactive, knowledge I gained was priceless, but my biggest impressions are the people who were involved in the project and (as you could’ve guessed reading this article) relation with participants from Kosovo. It is something unique and quite uncommon for our people. It is something that others can, and should, look up to and to see that prejudice in nothing more than a word. We all have become great friends and, in my opinion, that is the main purpose of the programme. I really hope NGOs who organized Our Future Europe will make a gathering for all participants from the Netherlands, Kosovo and Serbia, so we can sit again altogether, have a chat and revive memories from the programme.